Skip to content
my bedroom has always been my ‘safe haven’. if i could be anywhere in the world at any given time, i’d more than likely choose to be in my bed. we have a strange little love affair going on. anyway, now that my room is finished and lived-in, i love being in it even more. it turned out better than i had imagined in my head and i’m incredibly pleased. here’s a look: 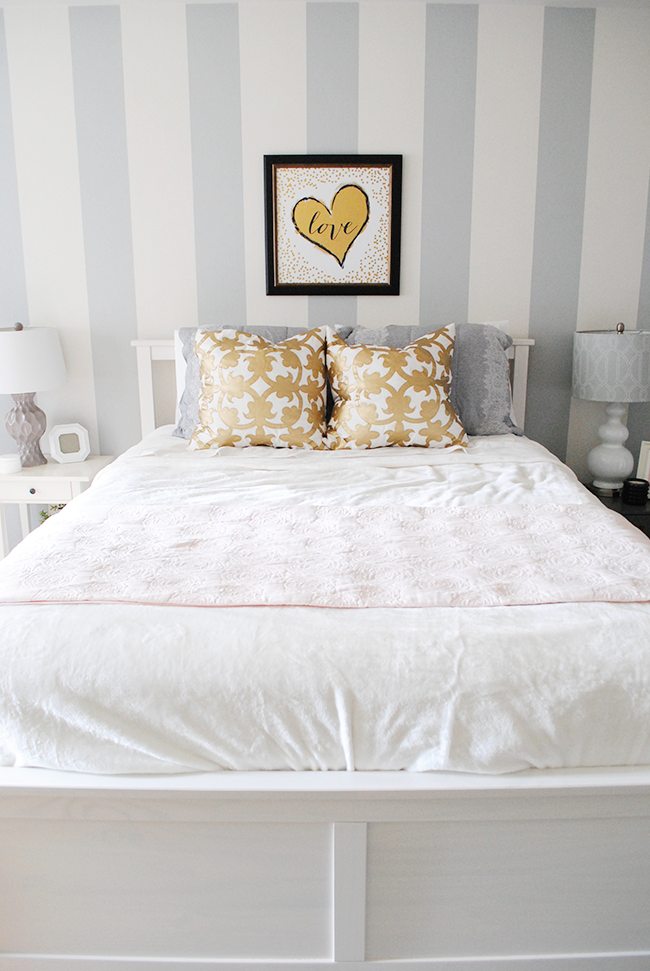 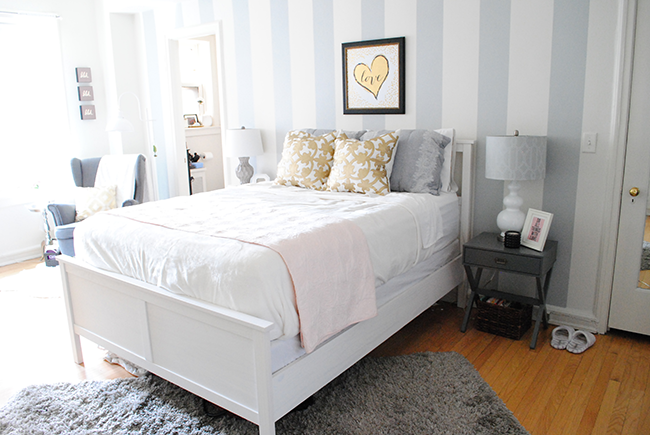 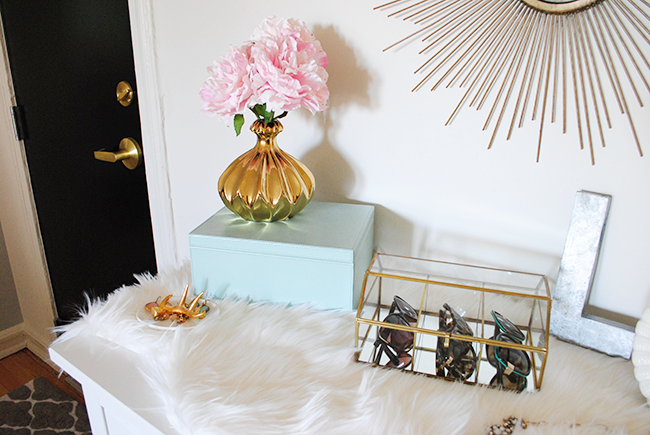 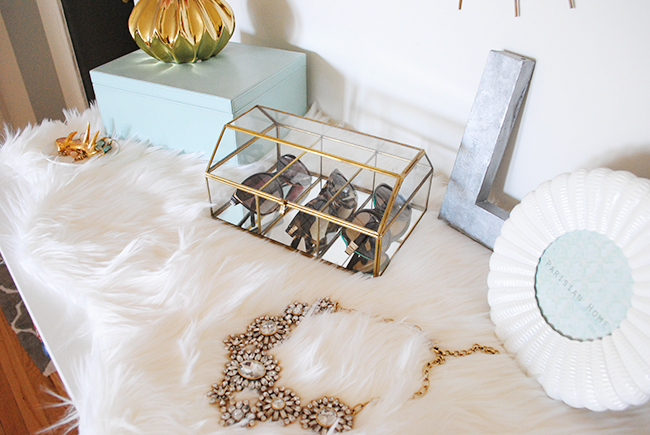 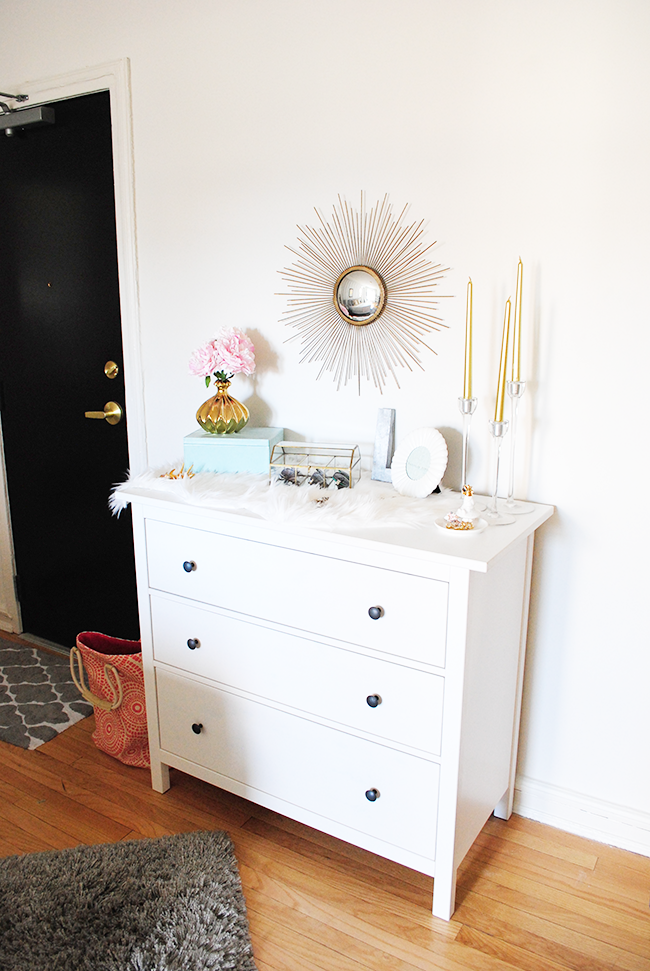 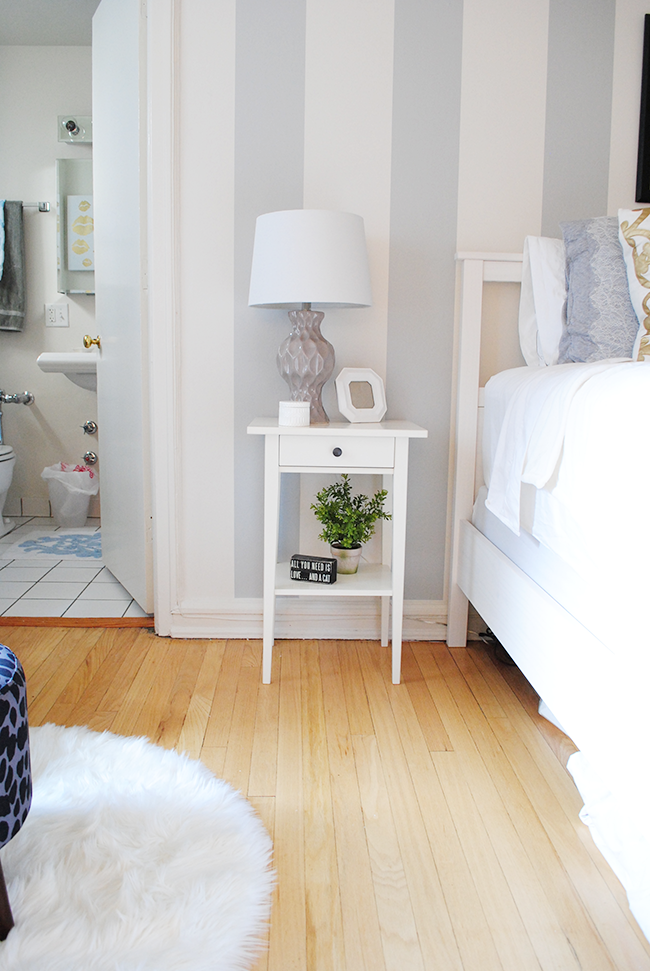 when i first moved into this room, i was quickly aware of just how white the walls were. with so much wall space, i knew that i needed to do something on the walls that wasn’t framed art or something else hanging. the idea of striping the walls sounded like the perfect solution, but i wasn’t interested in painting (mostly because i detest painting, but also because i didn’t want to have to paint the walls back to the original color before moving out). the stripes are actually decals that my mom and i put up shortly after we moved in. they’re from Walls Need Love and they’re awesome. i decided on the 8″ stripe in pebble. we used just shy of two rolls, with just enough leftover for any touchups that may need to be done. after doing a little calculating to figure out how much space we wanted between the stripes and how many striped would need to be cut, we got to work. after figuring out a good method with the first stripe, we had the wall done in about 2 hours.
the rolls come with a grid on the back, which makes it easy to cut a straight line and measure the length of the stripes. i was put to work on cutting strips of the decals, while my mom marked up the wall with little pencil marks as a guide for straight lines. we tag-teamed attaching the decals to the walls and it worked out well! although it went quickly and smoothly with the two of us, i could definitely have done it by myself. it would have taken longer and probably about 4 times more effort to figure out the proper measurements, but it can be a one-person job!
the stripes make a huge difference in making my room feel like home. and the best part is that i can just peel them right off when i’m ready for a change! (i have a feeling it will be a long time before that happens though. i love how it looks too much!)